The 2015 drug driving offence allows officers to test for a large number of specific drugs in a driver’s blood. However, a lot of ‘so called’ legal highs, once touted as the safer, legal alternative to illegal drugs and alcohol are not part of the recent changes, so we ask the question what happens with legal highs on the road and what changes has the new Psychoactive Substances Act 2016 made.

What is the Psychoactive Substances Act 2016[1]?

The Act came into force on 26 May 2016. The blanket ban on selling ‘Novel Psychoactive Substances’ or NPS (also known as legal-highs) was intended to protect younger people by banning any production, supply, importation or exporting of these dangerous drugs, which in 2014 claimed 144 lives in the UK alone[2].

The United Kingdom is the first country in the world to implement strict legislative measures to combat these psychoactive drugs. Since 2010, the UK government have banned over 500 different NPSs from the consumer market[3].

What does ‘psychoactive substance’ mean?

The legal definition under the Act is:

“any substance which is capable of producing a psychoactive effect in a person who consumes it, and is not an exempted substance”.Legal Definition

The Advisory Council on the Misuse of Drugs (ACMD) raised concerns that this definition is far too broad and will eventually be unworkable in enforcing the laws. However, the Government, during the Bill stages of the Act, reiterated that the definition was purposely left broad so that testing whether a substance was psychoactive was a simple, cost effective procedure.

The only exceptions from the Act are those substances already covered under the Misuse of Drugs Act, nicotine, alcohol, caffeine and alcoholic products.

Temporary Class Drug Orders can still be applied by the Advisory Council which allow the Government to alleviate problems created by the wide range of NPSs. They have proved useful to the Advisory Council and allowed them to ban frequently abused compounds such as NBOMe, Mephedrone Compounds (such as MCAT) and Naphyrone (such as Energy-1).

Possession, Supply and Production of a Psychoactive Substance

Possession of a NPS is not an offence currently under the law. However, possession with intent to supply, import or export a NPS are offences.

Another exception to this would be if an individual possessed the substance whilst in custody (i.e. youth offender’s rehabilitation centre, prison or holding cells).

The police have powers to stop and search anybody whom they reasonably suspect may be in possession of a NPS. This power is extended so that they are able to search properties and premises.

A trend which has been common amongst many young people today has been the use of nitrous oxide (balloons) to get high and poppers (often classed as a NPS). Nitrous oxide used in food science and preparations has not been regulated by the new Act – however, the sale of the gas for getting high has been covered by the legislation. The onus is on the individual who sells the gas to prove that this is not the intended purpose on point of purchase, which may be quite an onerous task for sellers.

The House of Commons outlined that there was a fear amongst the Government that if poppers were banned, this may lead to an increase of using other, more dangerous substances[4].

Impairment on the roads will also depend on the dosage or ‘life’ of the NSP used, gender, age and body fat of the user. Studies point towards the similarities in some NPSs with heroin (or other opioids) –  often impeding reaction times, reduced concentration, reduced ability to think clearly, blurred vision, nausea and passing out behind the wheel. 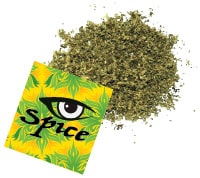 Spice has been touted as the most widely used and dangerous NPS due to the fact medical professionals cannot identify its exact composition. Moreover, due to the cheap street value of the drug and its cannabis-like-effects; synthetic cannabinoids have become widely accessible and used by younger people and the homeless communities.

As the majority of NPSs and opioids are depressants, they will slow down the messages between the brain and body.

Existing drug laws & what you need to know?

There are a number of drugs for which prescribed limits have been established; driver impairment need not be proved under the 2015 drug driving laws which is why things have become much simpler for police to arrest offenders.

If you are pulled over the roadside and test positive on the roadside drugalyser sweat or saliva test, you will be arrested and required to provide a sample (blood) at the police station. The result of the blood test will be evidential and used to prove the level of drugs in your system at court.

Driving whilst Unfit through drugs

The offence of ‘Driving whilst unfit through drugs’ is known as the old drug driving laws yet it continues to be an offence to be unfit whilst driving, when under the influence of drugs.

A ‘substance used as a medicine is a drug, something to cure, alleviate or assist an ailing body’; will be classed as a drug. However, the quantity will affect each person differently.

To secure a conviction, the Crown must prove that:

The police may administer any one of the field impairment tests to ascertain whether or not you were impaired at the time.

Even though the specific NPS may not be stipulated under any of the pre-2016 legislation dealing with drugs, you may still be able to be prosecuted if the effects of them mean that you are ‘unfit’ whilst driving.

Moreover, even if a NPS doesn’t register positive on a roadside drugs test, they may still leave you liable to prosecution by way of an unfit through drugs charge or through the Psychoactive Substances Act, particularly if you have a large quantity.

Only certain NPSs which were classified as Class A, B or C are covered under the Misuse of Drugs Act (i.e. MCAT). Specific directions have been given to Police outlining that all other ‘newer’ PSAs will fall under the new Psychoactive Substances Act and should be treated as a prohibited substance.

It is important to remember that the Act Psychoactive Substances Act does NOT replace the Misuse of Drugs Act 1971. The laws surrounding illegal controlled drugs still stands.

What are the penalties under the Act?

The penalties that can be imposed under the Psychoactive Substances Act are laid out below.

Offences under the Psychoactive Substances Act would be considered ‘aggravated’ if they involved supply to under 18s, were near a school or a children’s home (Local authority children’s homes etc).

So… What does it all mean?

It is clear that psychoactive substances are likely to impact on driving performance. Impairment will be more prominent immediately after ingesting the drug, but effects will likely still be noticeable hours after use.

For the driver, most NPS will not be detected in the current drug driving tests. However, drivers who take NPS are still subject to the rules pertaining to driving whilst unfit through drugs and are taking the risk of being prosecuted for using before or whilst at the wheel.